Set List
Small Faces – Hey Girl
Buddy Holly – I’m Gonna Set My Foot Down
Lolas – In My Car
Paul Perryman – Just To Hold My Hand
NRBQ – You Got It
Allen Toussaint – Up The Creek
Flamin’ Groovies – Have You Seen My Baby?
Jimmie Dale Gilmore – Rain Just Falls
Rolando Alphonso And His Soul Brothers – Dr. Ring-A-Ding
J.J. Jackson And The Jackaels – Oo-Ma-Liddy
Joe Brown – There’s Only One Of You 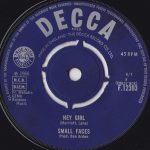 Lucky episode 13 kicks off with Hey Girl,  a blatant (and successful) crack at commercial success for Small Faces.  Marriott/Lane composition single cracked the Top Ten on the UK charts in 1966.

Buddy Holly recorded I’m Gonna Set My Foot Down sometime in 1956, but this un-dubbed original recording remained unissued until 1983 when it was released on the HIGHLY recommended LP For The First Time Anywhere.

Birmingham , Alabama isn’t the first place that comes to mind for jangle pop perfection, but here are Lolas! Lolas have three LPs for sale at Bandcamp, but I first heard these folks via the Wizzard Brew compilation from Japan’s Wizzard In Vinyl label, pop tastemakers from the early 2000’s. I hear Wizzard In Vinyl is plotting a comeback and I can’t wait.

Paul Perryman‘s Just To Hold My Hand has been covered numerous times, but I could find scant information on My Perryman, other than discographies of his releases on Duke Records. Got any leads to share? Where’s I first hear this song? Not by Perryman, but my heroes NRBQ...

… who we can hear on You Got It  from Tapdancing Bats, the1983 collection of oddball recordings. Big Al handles the lead vocals. And there’s something oddball about this one – I get a feeling it was written in a major key, but someone along the way said “let’s play it minor.” 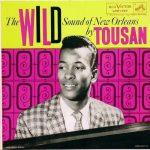 Allen Toussaint‘s (billed as “Tousan” on the LP cover) first LP was entitled The Wild Sound of New Orleans, and  Up The Creek comes from that  1958 collection of early instrumentals.

Flamin’ Groovies firing on all cylinders with a cover of Randy Newman’s Have You Seen My Baby from the last LP of their early Rolling Stones-influenced incarnation. They’d switch gears and labels (from Kama Sutra to Sire) and reinvent themselves in a vision more influenced by Beatles than Stones.

It takes Jimmie Dale Gilmore to cool things down after the Groovies, and this is the gorgeous last track on his 1988 Fair & Square LP, a song written by Austin, Tx songwriter David Halley. 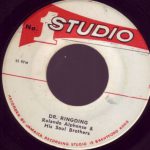 Cuban born Rolando Alphonso made his name as a founding member and saxophonist in Jamaica’s Skatelites. This 1966 number by Rolando Alphonso And His Soul Brothers has a melody that sure sounds a lot like Twine Time by Alvin Cash and The Crawlers, but maybe that’s a case for investigation by the Dr. Ring Ding.

J.J. jackson had a big hit record with It’s All Right in 1966, but this is a entirely different J.J. Jackson, and Oo-Ma-Liddy made lips smack (and feet groove) in 1961.

Last up, the great Joe Brown with a 1963 album track, There’s Only One Of You. Joe was, and remains a big influence to the British beat set.